Will there be a Global release for Blue Protocol?

The Game Awards 2022 has confirmed that Blue Protocol will officially be releasing globally during the second-half of 2023. It will be available for PC on Steam, PlayStation 5, and the Xbox Series X/S with Amazon Games as the publisher. You can follow us on Twitter or join us on Discord to stay up to date with the latest news.

When will the next testing phase be for Japan and Global?

The Japanese Network Test for Blue Protocol will begin on January 14th, 2023 at 14:00 JST and will last until January 16th, 2023 at 14:00 JST. Registration for the testing phase will close on December 13th, 2022 at 11:00 JST. If the amount of applicants exceed 50,000 players, the accounts will be selected by lottery. More information is available from the recently aired Blue Protocol Communication #5.

How do I apply to the Global Closed Beta Test?

What languages will be supported for the Global version of the game?

Blue Protocol will be available in English, French, German, Spanish, and Brazilian Portuguese.

Will there be an option for a Japanese voiceovers instead of having to use English voiceovers?

The franchise lead Mike Zadorojny at Amazon Games has stated that Japanese voiceovers are available but it was not implied if it was added as an option yet to the game client.

What regions will the Global version of Blue Protocol be available in?

Do I need an Amazon account to play the Global version of Blue Protocol?

Will the Cash Shop be different in the Global version compared to Japan?

The franchise lead Mike Zadorojny at Amazon Games says that the Cash Shop will not exactly be the same because they will be making changes specifically for the western market. We want a design that suits western players and find our own ways to satisfy the players.

Will there be founders packs for the Global release? What will the Cash Shop have in the Global version?

Amazon Games has confirmed that they will have Founders Packs that will give you perks such as access to beta events in 2023. Additionally, there will be bundles that will be released along with new content.

There will also be an in-game store where players can purchase items in a variety of ways. There's what we call the Capsule Beta, which are random cosmetic items for costumes, mounts, and weapon skins.

What about crossplay between platforms for the game?

Bandai Namco has officially stated that they really want to add crossplay as an option to the game. They'll provide more information on this subject next year in detail.

Is Blue Protocol Free-To-Play? Does it have a Cash Shop or Battle Pass system?

Blue Protocol will have a F2P (Free-To-Play) model that consists of a traditional cash shop. The developers have confirmed that the paid features from the cash shop will offer cosmetics only and will not be pay to win. Costumes will not have any form of stats. Additionally, a season pass/battle pass element will be included for players to receive extra rewards.

What classes are available? Will they add new ones?

Currently, there are five classes which are known as the Blade Warden, Twin Striker, Keen Strider, Spell Weaver and Foe Breaker was which announced recently. After the official release of the game, the team will be adding more classes. Additionally, they will focus on adding modifications to existing classes which allows a class to grow in different directions through specializations.

Are the classes gender locked?

No, classes are not gender locked.

What are the PC specifications required to run Blue Protocol? 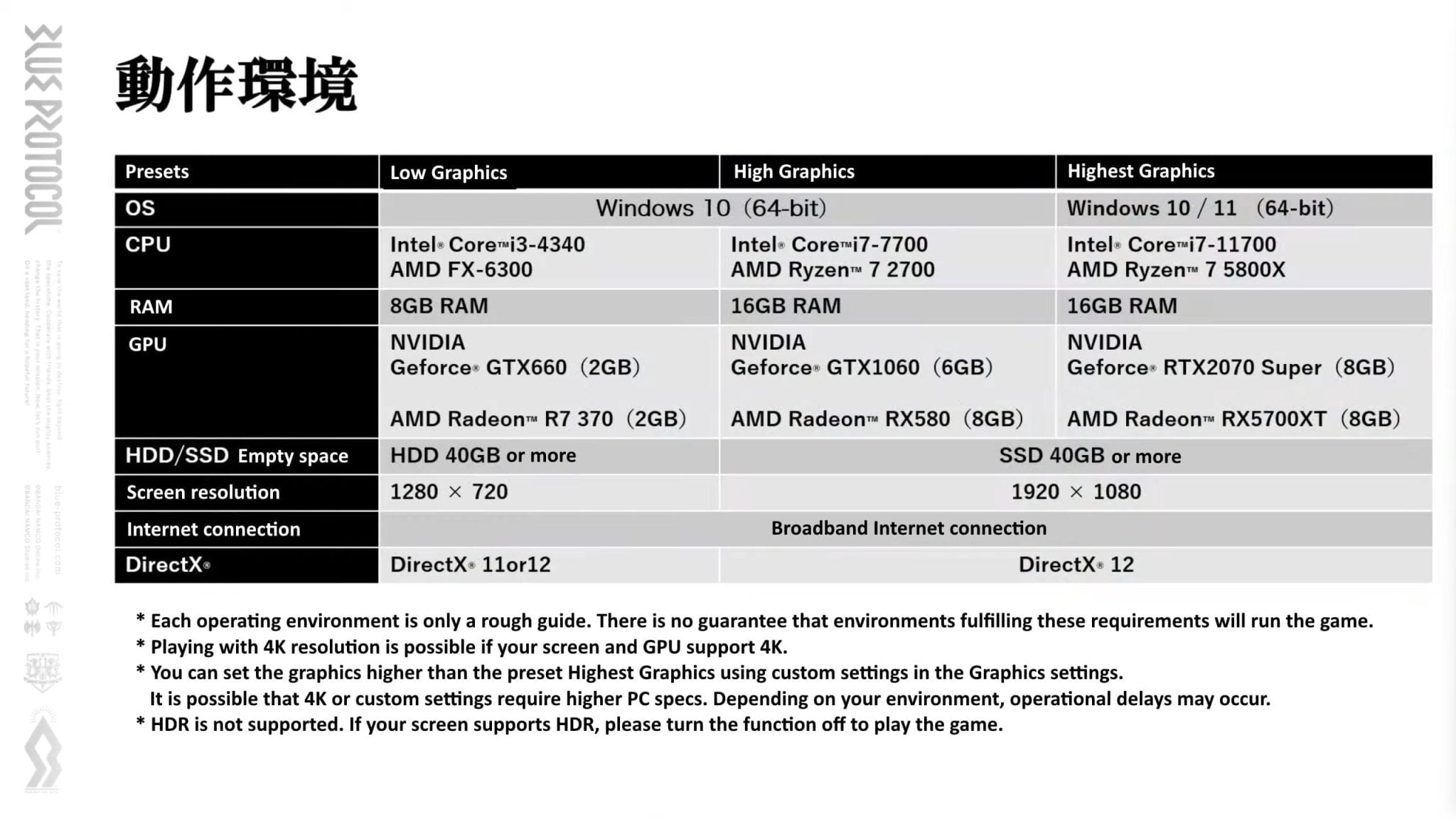 Will there be a housing system?

Yes. The developers confirmed that there will be a housing system that will be introduced after the official release of the game.

Are players able to trade in Blue Protocol?

They do not have any plans to add trading at this time.

Will there be an Auction House or Marketplace for players to put items up and sell?

There are no plans on adding an Auction House or Marketplace system at this time.

Can you explain the Echoes system?

Echoes are pets which help assist you in combat throughout the world of Regnas. There are three different types which are known as:

1. Battle Echoes - Pets that help you fight in combat and grant you buffs.

2. Inner Echoes - Provide stats towards your character which you can equip.

3. Mount Echoes- Mounts which you are able to traverse the world with.

What are Plug Equips?

Plug Equips replace Echoes as an option to put into the socket of your weapon. A weapon contains a maximum of 4 slots allowing you to put 4 Plug Equips in total. Plug Equips can increase your stats and potentially grant special abilities.

Blue Protocol will support 4k resolution displays but it will not offer an Ultrawide option as the developers feel that there are advantages which occur from a wider field of view.

Is there a PvP system?

No. There are no plans to add traditional PvP into Blue Protocol. Instead, they implemented an Arena system into the city of Asterliese where you can compete in rankings via PvE Party content.

Will Blue Protocol have a trinity system? (Tank, Healer and DPS roles)

Typically in a traditional MMORPG you would have the Tank, Healer, and DPS role. However, in Blue Protocol, the classes function a bit differently. Certain classes will have a self-heal or party heal available. In addition to this, there are also classes which have skills that increase your threat generation on monsters. The unique aspect of playing Blue Protocol is that classes have different and unique specializations where you can decide on how you want your own character to grow. There are many ways to change or amplify the effect of your skills. You are also able to learn skills from other classes through the shared ability function. For this reason, it's not clearly distinguished.

Currently you cannot select a specific channel to switch to. Each channel per city has a 200 player limit. Field zones on the other hand have a limit of 50 players per channel. Once that limit is reached, you will be phased into another channel. The only way to visit other members is to travel through the party menu to them. If you are in a party with other adventurers and choose to move to a different field or go back to town, the game will prioritize reserving a channel for you and your friends to be moved in together.

What is the plot for Blue Protocol?

Regnas, a planet once ruled by a divine tribe, thrived using a mystical light. Many millennia later, what remains are their ruins, treasures, and a dark secret. Once the divine tribes left for the heavens, an era of human rule arrived in search of the remaining light. People stepped foot into the ruins of the Bapharia to locate lost technology, shining treasures, monsters attacking, and towering ancient structures. Fighting for the fate of the planet, a new page in Regnas’ history will begin.
The story of our protagonist begins with two dimensional beings appearing in the Asterliese Cathedral. They claim to have traveled back thousands of years through time and space. Their goal was to release Avalitia, a monster from fairy tales, to change humanity for the greater good. Upon learning of their existence, the dimensional beings bestow their explanations to us, forcing us to choose an ultimatum. Now, you have to make a choice as to whether you stand together with these weary beings, or perish forever. Take it into your own hands to unravel the truths of Avalitia and the world of Regnas. Locate your missing memories and set out on a dangerous journey.

Is there any news on console support?

Blue Protocol will be available on both PlayStation 5 and the Xbox Series X/S. The PC version of the game will also have controller support available.

Is Blue Protocol an MMORPG?

Yes. Blue Protocol has many online elements that feature party play with an emphasis on strategic teamwork. The game contains loading screens between zones similar to other MMORPG's on the market and each zone is replicated according to the amount of channels the Blue Protocol server needs.

Will there be guilds in Blue Protocol?

Yes. They will be implemented eventually.

Is my Bandai Namco ID required to have Japan selected as my country of residence to participate?

Yes. If you did not register your account with Japan selected as your country of residence then you cannot send in an application. It is required.

How do I register for a Japanese Bandai Namco ID?

How does one apply for the Japanese testing phase with their Bandai Namco ID?

The short answer, kind of. Bandai Namco goes through great lengths to block non-native Japanese residents when applying for their testing phases.